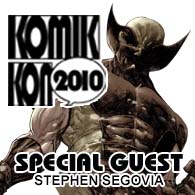 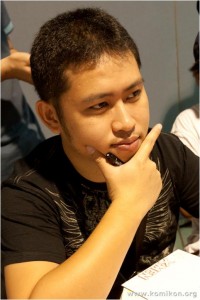 Imagine yourself holding a copy of a Wolverine comicbook and discover that the artist was the same person who drew Tomas en Kulas of Funny Komiks.

Stephen Segovia tells us how he started out. “At first I started sending samples to the local publishers like Islas Filipinas (Funny Komiks) and GACI. At the tender age of 16, I got a job at Funny Komiks and been working with them for 6 years as a writer and artist. While doing some work for Funny Komiks, I also worked on a book called CAST by Jamie Bautista. I did 6 issues for that book.” He later met David Campiti from Glass House Graphics, who became his agent. “I got a job from Harris Comics and did a couple of series for Vampirella. I also worked with other big publishers such as Dynamite Entertainment and DC Comics.  After 5 years, I finished my contract with Glass house and now I am working solo and exclusive for Marvel comics.”

Segovia is best known for his Wolverine Series. His most favorite of all his works, he says, was Wolverine, Manifest Destiny. “I’ve really enjoyed doing that series and it’s an honor working with such a great writer like Jason Aaron.” When asked how different it was working locally and internationally, he answers, “The only difference working locally for comics and internationally is the fee. I admit that you can’t relay your expenses as a local comic artist. The fees are way too low BUT the good thing is that you enjoy working, draw what you want and also create your own story. You just have to work as many pages as possible in a day so you can earn more money. Regarding foreign work, the salary is way bigger than your local salary plus you have a chance to draw your favorite hero characters and earn so much for doing just a single page a day. The down part is you don’t have a social life. I usually spend more time on my drawing table for 16-18 hours a day. Doing a page a day on 11×17 art boards is a big deal so I have to discipline my self.”

Currently there are a lot of Filipino artists working for foreign publishers. How does Stephen think they stack up against the first generation of artists that went before them? “If I am going to compare it on the way they worked (step by step) and the resources, I should say that the new generation artist is much advanced than the first generation. Today we have Cintique, Wacom tablet and such things to speed up our work. I think we are just advanced regarding the step by step process and digital works but if I am going to compare it on the details and creative stuff, well no one can beat those classic artists. They are gods and they influence us all.” 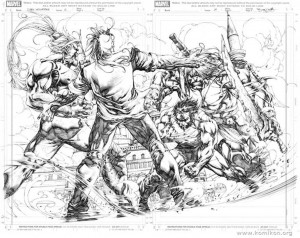 Before he broke into Marvel, he was a member of the independent comic group Ground Zero.  Stephen says he’d love to join a local group once again. “I am cool about working with the new group if they will accept me… I’m looking forward to produce indie books again but unfortunately the only thing I can contribute is some covers or pinups.” He continues to buy independent comics until today as his way of supporting the artists.  “They are bringing back the life of the local comic books. I salute them and I hope they will never get tired of creating great stuff! For Stephen, the greatest Filipino artist is…” I think all the Filipinos out there that keep on making great comic books, never stops drawing, keeps on dreaming and helping those beginner artist are the best Filipino illustrators today”.

A few of Stephen’s influences are Travis Charest (WildCATS, Metabarons) and our very own Leinil Yu (Ultimates, Superior). He’s always been a fan of Batman, saying “I am really dreaming of doing a Batman series… Since I was a kid, I love to draw Batman.” He also wishes to collaborate with Mark Millar (Ultimates) “His writings are masterpiece. It’s like watching a blockbuster movie. I would love to draw some of his writings even if it is just a one shot, I still love to do it. Regarding on creating my own title for foreign publishers, it’s not yet on my “Goal list” but also looking forward to do one in future.”

Finally he shares, “I think I would really want to draw Tomas en Kulas again. I missed those crazy characters.” His advice to aspiring illustrators is to just keep on drawing, never stop believing yourself and have a faith in God almighty. To his fans, “Thank you for all the support! You guys are the reason why I am inspired to draw comics.”