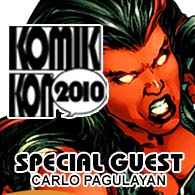 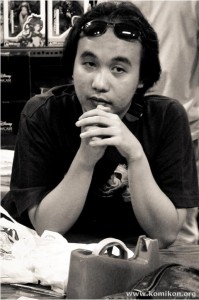 Carlo Pagulayan drew such comic characters like Elektra, Emma Frost, Superman, Hulk and the X-Men. He’s not a graduate of fine arts like everyone would assume. Carlo took a course in industrial engineering. “After graduation, I got a job as a Production Supervisor in a PCB plant.  It’s in shifts so, technically it’s partly a day job, and I spend some evening shifts drawing stuff.” Carlo then worked for Glasshouse Graphics since 2001. He describe how he started in comics as “Hard and lucky.  It took me 2 years from initial tryouts, and an additional 3 years before getting in through an agency; I sent out samples to Top Cow when I was in 2nd yr college.  It’s relatively easier now, since of course, you’ve come to know more people, and people have seen the artwork.  But it’s still definitely not a walk in the park.” Like others who broke into the US Comic scene, he too has received offers to work abroad. “There was, but turned it down since I was still drawing something else, so that made it even easier to say no.  I’d be hesitant to work abroad, as I really don’t like working away from home… of course there would offers that would be hard to say no to.  So it really depends on the situation.” We asked Carlo to describe the comic scene in the US right now. He says the US scene is nearly overwhelmed with “superbeings”… “I think publishers are going mad with how to keep them in check.  But remarkably they still do, and still maintain a good number of readers with their stories.”

We asked Carlo if he has tried to draw in different art styles. He answered “I did, before trying out and of course when I was in school drew cartoon comics for the school papers.  I drew a few anime here and there but not seriously.  And right now, I’m venturing into some sculpting, which at the moment is still centered in realism.” You can also see him during events with a huge camera. Does anyone need a photographer?

“I prefer drawing in pencil traditionally, I prefer painting digitally, just because I’m messy with my stuff as it is, and I think adding paint tubes and bottles would make it hell. I envy people that could paint with real paint.” His top 3 Filipino artists are Alex Nino, Alfredo Alcala and Leinil Yu. He loves how Alex Nino’s figures flow through a scene, and how his compositions always pull you in.  “His style way back, was just beyond the times”. He admires Alfredo Alcala’s mastery of rendering and says, “I just love dissecting his linework over and over.” Finally, Leinil’s “impact, his figures always give a sense of power, compositions plain beautiful.” 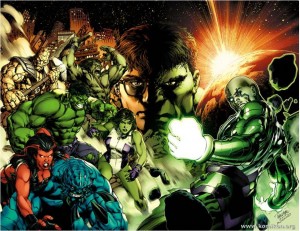 The local comic scene, he says, is still kept alive through the indie people, who aren’t afraid to create new stuff, stuff that most local publishers would’ve considered risky. Does he plan on making his own comic? “Yes I do…everybody in Comics does.”

To end, Carlo shares, “There was a point that an artist always came up to me asking for critiques,  I then proceeded to ask him what he thinks of his results, and true enough he spotted his drawing errors, without me pointing it out.  It makes me appear like a jerk though, but my point is we artists know what we were hoping to achieve, and end up nearly every time unsatisfied with our work; because we very well know where we went wrong.  So my advice has always been, be your own worst critic.  And in that way you’ll also be less hurt if someone’s worse than you.”