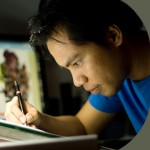 Harvey Montecillo Tolibao is a native of Malaybalay City, Bukidnon, Philippines. He went through a rough time as a child who struggled for art – literally. It’s a great story to hear from Harvey himself, what he went through to join numerous art contests. That was then.

Harvey is now known for his work on STARWARS: Knights of the Old Republic issue 12. He assisted artists like Carlo Pagulayan, Stephen Segovia, Lui Antonio and others. He worked for the studio Glasshouse Graphics for 5 years and finished his contract last December 2009. 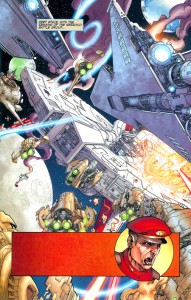 What can he say about David Campiti and Glasshouse Graphics? “David actually aims to help artists, but sometimes, because of the gossip and misinformation, the relationship between the agent and artist becomes not good. To the extent that would lead the artist to become a freelance rather than to have an agent. So what I learned when I was in GHG, fairness and honesty would lead a company to a very productive, more competitive, progressive studio.” He continues to say, “ Those guys are really great, very patient with us…I’m the type of person who always ask a lot, I’m very eager to learn and have a never ending search of knowledge. And all this curiosity make me realize that in the business you don’t only have to be a good artist or illustrator but you have to have discipline, you need to follow deadlines and be creative to survive in this industry.”

So how has he been since his career move to comics? “It turns out well that I help my family financially and send my brother and sister in good schools. It all turns great.” He says it’s every artist’s dream to work and be published internationally and quotes, “…having this kind of job would have a very big responsibility not only that you’re bringing your name but you’re representing the country. But totally it ROCKS.” When asked if he was offered to work abroad, he said, “Yeah, there are some. I would absolutely grab the opportunities if it would be a win-win situation.”

Since his break into comics, Harvey receives numerous fan mails. “I have a Deviant Art account and FB, and thru this I can keep in touch with them. I help some of those who ask for tips and tricks in illustrating. So these sites help a lot.” When fans ask for advice, he says, “LUCK IS WHEN OPPORTUNITY MEETS PREPARATION. So you need to keep doing the things you love most, you need to understand and believe on it, for someday this would bring you to a LIFE you can only dream of.”

Harvey loves drawing fantasy and sci-fi stories. He would love to work on “Lord of the Rings” type of artwork and said, “I might say Frank Frazetta characters.” But will Harvey ever do a local comic? “Yup. Actually,I already aired the title when we have the chance to guest in NU107 with Jiggy Cruz, Gerry, Arnold. The book is called PAYONGMAN, Hopefully next year the book would be out in the market.”

Hear more about Harvey Tolibao and other special guests this coming November 13, 2010 at the 6th Philippine Annual Komiks Convention (KOMIKON 2010) to be held at the Star Mall Trade Hall. Visit the Official Komikon Website and Komikon @ DeviantArt or join the Official Komikon Group in Facebook for updates on the event.