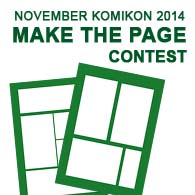 It’s time to challenge your creativity and let your imagination run wild!

Komikon is glad to announce our Make The Page Contest for this coming Komikon 2014!

Entries should be in the form of a comic book with the following specs:

– Submit 3 copies of your entry to

or drop off your entries at the following:

Send an email to contests@komikon.org with the subject: Make The Page 2014 Entry, together with your name, contact number, title of entry, when and where you have submitted your entry.

Winners will be announced and awarded on Komikon 2014, November 15, 2014 at the Bayanihan Center, Pasig City. Must show a valid ID to claim your prize. Unclaimed prizes on November 15 will be forfeit.