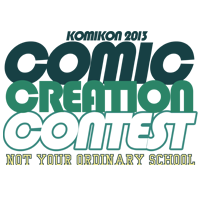 This year’s theme is: NOT YOUR ORDINARY SCHOOL

Create a comic book appropriate for young adults about a group of students attending an extraordinary school.

*send us an email at contests[@]komikon.org to confirm if we have received it. Indicate how it was sent (air mail, LBC, etc), tracking number (if applicable) and date sent

Entries should be in the form of a comic book with the following specifications:

For any clarifications or questions, send us an email at contests[@]komikon.org with the subject: CCC KOMIKON 2013 Inquiry.