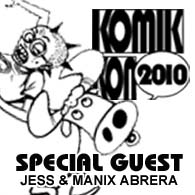 KOMIKON has featured a number of artists on its stage since 2005. We are excited to have as one of our special guests this coming November two generations of artists in one family! We bring you father and son cartoonists, Jess and Manix Abrera. 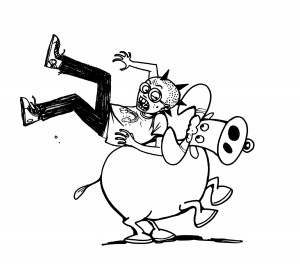 Jess Abrera is one of the pioneers of The Philippine Inquirer (PDI), working there for 24 years. He is the chief cartoonist and comics editor of The PDI where his comic strips A. Lipin & Pinoy Nga! are published. Making politically themed strips, we asked him if he ever received any threats. His answer was, “Yes, at hindi lang threats mga awards pa!”  True enough, Mr. Abrera received the National Book Award from the Manila Critics Circle for Pinoy Nga! He won Best Humor in Cartoons from the Catholic Mass Media Award (CMMA) and Best Editorial Cartoon in 2006, 2007 and 2008 entering him into CMMA’s Hall of Fame. He also received the grand prize for children’s book illustration in 1987 for the book Handyong from The Philippine Board on Books for Young People (PBBY).

Sir Jess is really a funny character. When asked about when he started drawing, he answered “Noong caveman pa ako nagdrodrowing na ako sa mga caves. 70’s”. He said the first few comics he like were Walt Disney comics, local comics and…uhm…porno…comics.  Before he worked for the newspaper he did serious illustration of animals at the UP Natural History Department, was an advertising artist, a children’s book illustrator, and goes on to say “dance instructor, tailor, conductor ng bus, bugaw at marami pang iba. Ang kulit mo, ah!”.

Like his father, Manuel Abrera also graduated in the UP College of Fine Arts. Manix graduated with a major in Visual Communication last 2003 and is currently taking his Master’s degree in Fine Arts.  He was an artist for the university paper The Philippine Collegian his whole college life. He is currently famous for his comic strip Kikomachine that comes out daily in The Philippine Daily Inquirer. He has published 5 compilations of his strips and also a graphic novel entitled “12”. When asked how he felt when 2 of his works became finalists in the Neil Gaiman Graphic/Fiction Awards, he said “Nakakaiyak!!” Manix is also known as a musician. He now plays for the band Gorgoro. We asked Manix how he wants to be known: as an artist or a musician. He answered, “Mabait na bata na lang. hehehe”.

Manix started drawing when he was a kid, drawing mostly robots. Is he a fan of comics? “Sobra! hehe.” he says,“Naaalala kong mga sobrang nagustuhan ko talaga mula pagkabata hanggang ngayon ay Calvin and Hobbes ni Bill Watterson”. Watterson is one of his favorite artists saying his strips were simple yet deep.  But of course, his first favorite artist is his dad. “Tatay ko. Ang dami kong natutunan sa kanya.” Manix says his dad is a big influence on him being an artist.  Sir Jess says, “No, ang influence nya ay si Aga Muhlach”.  Was Manix pressured having his work published alongside his dad’s? He answered, “Sa simula syempre pressure hahaha, pero ngayon oks naman na”. How does Sir Jess feel that his son is also into comics? “I feel like a human being.”

Now this is just an interview. Get to meet them in person and know more about them on November 13, 2010 at the 6th Philippine Annual Komiks Convention at the Starmall Trade hall along EDSA-Mandaluyong.