I. The PILOT PENS ON-THE-SPOT COMIC STRIP Contest is an on-the-spot short comic strip drawing/composition contest intended to highlight the creativity and skill of the Filipino artist. The theme will be “The Adventures of Frixion Man“! Create your very own Frixion Man character and draw a short comic strip adventure about him. 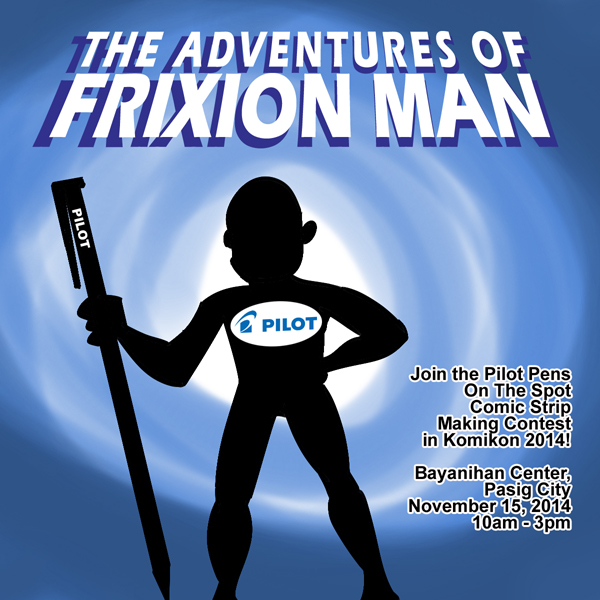 III. Contestants will be asked to create a three (3) panel comic strip on an Oslo paper with the corresponding theme.

V. Entries will be judged on the following criteria:

VI. The top three winners will be chosen and announced during the event where special prizes from Pilot Pens will be given to the winners. Judges’ decision is final.

VII. The contest is open to everyone at KOMIKON 2014 at the Bayanihan Center, Pasig City on November 15, 2014. The contest proper will start at 10:00 a.m. All entries must be submitted by 3:00pm at the Pilot Pens booth and winners will be announced on the same day on stage before event closing.

VIII. The use of excessive or overtly violent, sexual, offensive themes, graphics and language will not be allowed.

IX. All entries will be the property of the Pilot Pens and there is in no obligation to return them.

X. Pilot Pens shall have the right to use or publish the entries in the post event features/articles, with credit to the creator.

What are you waiting for?