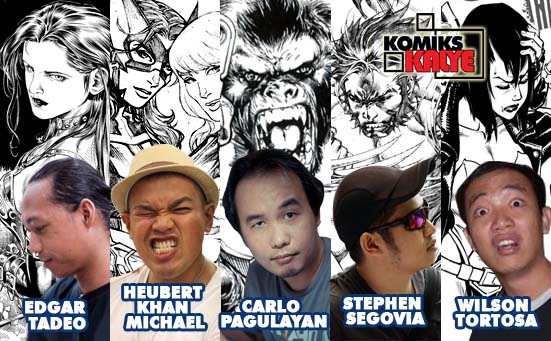 Carlo Pagulayan broke into the business as a contributor to Dark Horse Comics’ WTC Tribute Book, a charitable 9/11 project.  He later landed Marvel assignments such as Elektra and has since worked on Marvel’s Academy X, Emma Frost, X-men Unlimited, Marvel Adventures Fantastic 4 and Marvel’s Planet Hulk. He had gone to design Hulk’s son Skaar, paired up with Bendis to bring Avengers Annual #2 and then lent his hand bringing back Agents of Atlas with Jeff Parker.

Stephen Segovia is well known for drawing Dark Wolverine for Marvel and Reign in Hell for DC Comics. Most recently he worked on the pages of Ultimate vs Ultimate Avengers, Silver Surfer and Thor plus covers of Iron age, Spiderman, Vampirella and Thor.

Heubert Khan Michael is a 2-time Philippine Graphic Fiction Awardee who created his own indie comic Unstoppable and Unkillable. He contributed artwork for local comics Bayan Knights and worked on several webcomics including the hit spoof series “The Gutters“.  Heubert did interior artworks for DC Universe Holiday Special 2009, Vampirella, and an upcoming mini-series from Dynamite Entertainment.

Edgar Tadeo is a freelance inker who worked on titles such as Wolverine, X-Force, , X-Men , Cable & Deadpool, New Mutants and more.  He also did colors for Iron-Man, Captain America, Cable, Silver Surfer, etc.

Wilson Tortosa best known for his works on Tomb Raider and the American re-launch of Battle of The Planets for Top Cow Productions and Wolverine Manga.

From 2pm to 4pm the artists will do quick sketches for P500 (half letter size paper) and P300 (sketch cards).  Sketches will only be done on purchased paper provided by KOMIKON. This is your chance to bring home your personal masterpieces from these international masters!