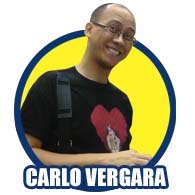 Carlo Vergara’s Ang Kagila-gilalas na Pakikipagsapalaran ni Zsazsa Zaturnnah won a National Book Award in 2002, and was adapted into a musical and a feature film in 2006. What more can a comic book artist ask for?

Carlo is doing the 2nd book, Zaturnnah in Manila, and he says, “I’ve accepted that the first Zaturnnah book cannot be equaled. So I released myself from the task of trying to match the kind of storytelling I did there. I went into the sequel with pretty much a clean slate where anything was possible. But I did have some ideas I wanted to put in there, and then built a story around it. Suffice to say, “Zaturnnah in Manila” will be a different book.”

Come and meet Carlo Vergara who is one of our special guests in The 7th Philipine Annual Komiks Convention on November 19, 2011 at the Bayanihan Center, Pasig City from 10am – 7pm. Tickets are at P100.