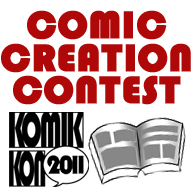 Get ready for this year’s Comic Creation Contest 2011 for the coming 7th Annual Philippine Komiks Convention (KOMIKON 2011) on November 19, 2011 at the Bayanihan Center, Pasig City.

COMIC CREATION CONTEST 2011
This year’s theme is: TRIBUTE TO JOSE RIZAL
Create a comic based on any of Jose Rizal’s works.

Entries should be in the form of a comic book with the following specifications:

For any clarifications or questions, send us an email at contests[@]komikon.org with the subject: CCC 2011 Inquiry.