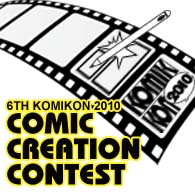 This year’s theme is: MOVIE ADAPTATION

Create a comic based on any Filipino Action Film.

Contest is open to all comic book artists except for professionals with published works sold in bookstores.

Contestants / groups are limited to only one entry.

Entries submitted by groups are required to submit the names of the individuals involved in creating the indie. Group entries with professionals on board are automatically disqualified.

Entries should adhere to the given theme. Entries deviating from the theme shall be automatically disqualified.

Submit 3 copies of your entry via air mail to

KOMIKON 2010: COMIC CREATION CONTEST
c/o Patrick Jungco at 2 Ruby Street Southville,Don Antonio Heights, Diliman, Quezon City 1127
*send us an email at komikon.contests[@]gmail.com to confirm if we have received it

Deadline of submissions will be on October 31, 2010. Entries submitted beyond October 31 shall not be accepted.

Winners shall be announced on the event itself on November 13 and shall be notified via e-mail or phone.

The judge’s decision is final.

Entries should be in the form of a comic book with the following specs:

Choose a scene or make a summary of the chosen movie.

The following information must be included in the entry: Movie title, Major Actor/s, Director,Production Outfit (e.g. Star Cinema, Viva, Unitel, etc), and year when the movie was released.

Actors / Actresses does not necessarily have to look exactly the same in the comic.

Entries should be placed in a short brown envelope with their name, address, phone number, and e-mail written legibly at the upper left hand corner.

Stories must be 4 to 12 pages long (excluding cover)

Please note that entries are non-returnable. Entries should be reproductions only. (originals will not be returned)

Colored and/or black and white entries are accepted.

There are no restrictions as to the genre or art style that can be used as long as the comic book follows the given theme.

The story should be in the form of a one-shot title. It should be whole in itself, with a clear beginning, middle, and end. Multiple comic stories in a single entry (anthology) will not be allowed.