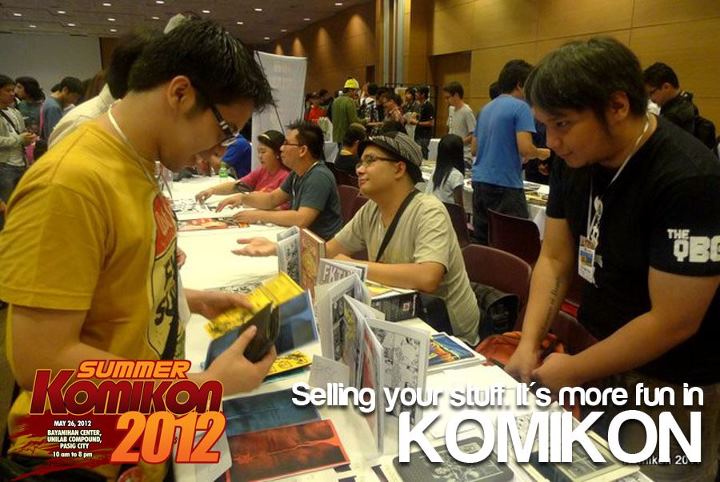 Do you want to attend the Summer Komikon 2012 for FREE?

Then join the “More Fun in Summer Komikon 2012” Contest! Here’s how.

Add the Summer Komikon 2012 logo AND the text “whatever your catch word/phrase is>, it’s more fun in KOMIKON” anywhere on your image.

“(Entry number of entry/ies you have added> by your name>)

whatever your catch word/phrase is>, more fun at @Summer Komikon 2012 !”

4) Make sure to select the link going to the Summer Komikon 2012 events page by putting the @ in the beginning.

5) Click on the uploaded image and Tag your name (as the creator) and the official Komikon page (http://www.facebook.com/komikon.org) where the Summer Komikon 2012 logo is.

6) The creator of the top 3 images that have the most number of ‘likes’ will get a complimentary pass to Summer Komikon 2012.

7) The creator of the top 3 images that have the most number of ‘shares’ will get a complimentary pass to Summer Komikon 2012.

8) The Komikon Committee may choose to award special awards to the most creative image.

-The image should be visible on your wall to the public.

-A person can only win up to a maximum of two times.

-Winners will be notified via their Facebook account and tickets must be claimed  no later than 12 noon of May 12, 2012 at the Bayanihan Center, Pasig City, or it will be forfeited.

-By posting your images, you are allowing Komikon and it’s organizers to use your image and name for any promotional means.

-Unauthorized use of other people’s image/photos will be subject to disqualification.

-Komikon Committee’s decisions in all matters are final.