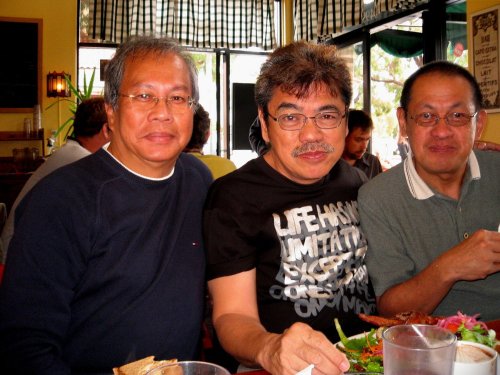 Hugo “Boboy” Yonzon III Publisher Boboy Yonzon believes in the Filipino’s ability to produce top-caliber stories and art. He believes in comics as a legitimate art form, and is intent on raising the bar for Philippine-produced comics, and, consequently, other forms of entertainment. Boboy is the President and CEO of Yonzon Entertainment Syndicate (YES!), Mango Comics’ mother company. He has been the president of the Samahang Kartunista ng Pilipinas (SKP) and the spearhead of the upcoming First Philippine International Cartoon, Comic and Animation Festival.

Orvy Jundis He is a comic collector and historian having written numerous articles about comics internationally. Orvy is one of the core members of the KOMMIX Veterans, supporting veteran comic artists and teaching children and young adults in Angono, Rizal about the art of making comics.

Elbert Or is currently finishing his thesis as a final requirement for his MA in Education while teaching in Ateneo de Manila University. There he regularly incorporate comics and graphic novels in his freshman English Literature classes, and teaches comics production classes for their Fine Arts Program. He’s been conducting workshops and seminars across the country for Nautilus Comics, where he served as editor-in-chief for a couple of years.

Gilbert Monsanto is a writer, an artist and a publisher of local comics. He owns the Sacred Mountain Publications which published titles such as Tropa, Rambol and Bayan Knights. Gilbert formed the Bayan Knights calling on independent comic creators who wants their characters to be recognized by forming a unique league of Filipino superheroes. He is also known internationally, working on different comics abroad.

Ayala Foundation for Bayan Knights#2 The Ayala Foundation works to extend the benefits of recent technological developments to a greater number of men, women and children. Through these new technologies, the Foundation continues to work for the cultivation of Filipino ingenuity and talent, as well as the preservation of our rich culture, history and traditions. With this in mind they have helped in the production of Bayan Knights 2 to promote good values in comics.

Japan Foundation Manila The Japan Foundation (JF) aims to promote and encourage cultural exchange and cooperation between the Philippines and Japan. The Japan Foundation has been holding “The Asian Cartoon Exhibition” (one-cut and multi-cut cartoons) annually since 1995 for the purpose of capturing Asian society, culture and customs of daily life through the medium. They have sponsored a number of local artists, bringing them to Japan to be part of exhibit, some of which are Pol Medina Jr. (Pugad Baboy), Elizabeth Chionglo (Loveknots) and Lyndon Gregorio (Beerkada).

UP Shopping Center houses a number of shops that caters to every independent comic need. Surely it has given birth to a number of great of indie comics.

U.P. Bahay ng Alumni The home of the Philippine Annual Komiks Convention (KOMIKON) for the past 5 years.
The Manila Bulletin the longest running newspaper in the Philippines is also a great supporter of local comic strip artists having its comic page the most number of locally made comic strips.

Intellectual Property Office opened The Alab Art Space, the first exhibit area in an IP office, to provide a venue for the country’s creative industry to showcase their works. It hosted Sining, Kamalayan at Paglikha, an art exhibit featuring over 30 artworks of the Samahang Kartunista ng Pilipinas whose members are foremost cartoonists from the country’s leading newspapers and magazines last October 20 – November 20, 2008. The IPO is currently active in activities such as these to promote more awareness about protecting people’s intellectual rights.