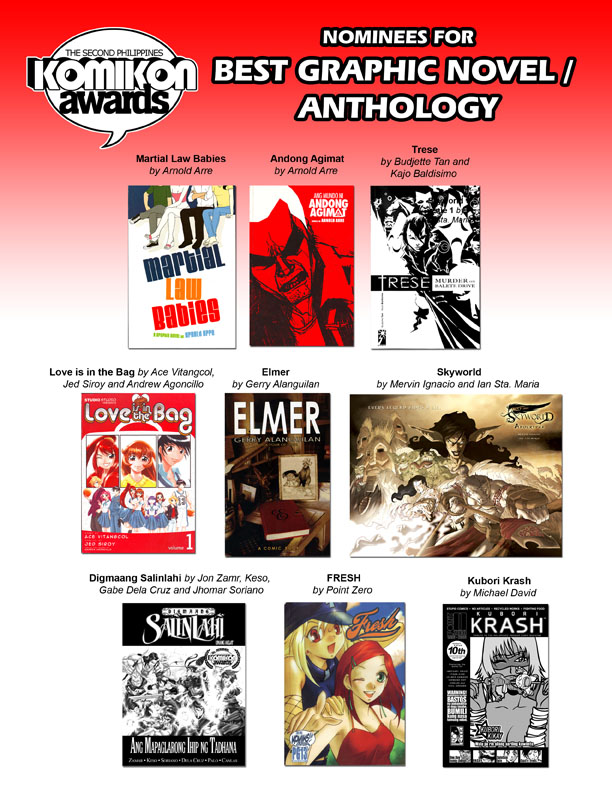 NOMINATIONS ARE NOW OPEN FOR THE KOMIKON AWARDS 2009!!!
Please take note of the following:
* Different titles created by a single artist/group can be nominated in one category.

• Nominated works, whether published, independent, or web comic, should have been released from 2006 until May 2009.

• Artists and works that have been nominated during the first KOMIKON Awards can still be nominated considering that their work/s is/are still being published during the nomination period.

• NOMINATION BALLOTS can be downloaded here.

• E-mail your nominations to komikon.awards@gmail.com with the subject: KOMIKON AWARDS NOMINATION. Only e-mail nominations will be accepted.

To give you an idea of who to nominate, you may view previous nominees here under Komikon Awards. Note that some categories have been changed/added.

The first ever KOMIKON AWARDS was held back in 2006 on the 2nd year of the Philippine Annual Komiks Convention. It is with great delight that we bring it back in a bigger and better venue and in celebrating the event’s 5th year. Once again, let us give recognition to those who continue to pour their heart, soul and income to a said “ailing industry” that still thrives to bring entertainment to future generations.

The categories are as follows:

Best Comic
This is for the ultimate… the chosen one. This is for the best among the rest. This means that the comic has achieved its ultimate potential; it’s all that and then some. This covers the mainstream comics, published and sold in the major local bookstores. This is for those that have reached the pinnacle of comic making; it’s up there, head and shoulders above the rest, looking down on us through a magnifying glass. This is for the comic that embodies all the things that made us love comics in the first place. The Best Comic award is divided in four categories:

Best Graphic Novel / Anthology*
Graphic Novels are defined as novels whose narrative is related through a combination of text and art, often in comic-strip form. On the other hand, an anthology is a collection of stand alone comic book stories collected in one publication by a group or one author. This award aims to honor the best comic book creator or group of creators for their exemplary work.

Best Comic Magazine
This award is given to the best comic book magazine still seeing print be it a single story or made up of several.

Best Comic Strip Compilation
Here’s a step from the day-to-day print to more lasting impressions. One strip is never enough.

Best Comic Creator/s*
This award recognizes the talents of a solo artist or team of artists in making the best comic there is.

Best Cover*
A cover dictates how people see your comic. Sales also depend on the cover. And here we salute those covers that made us look and look hard. And the effort to it took to conceptualize, pencil, ink, and in some cases, to color the cover. The award shall go to the artist or group of artists that created such masterpiece.

Best Cartoonist*
The award acknowledges the countless comic strip artists whose works are published in newspapers, tabloids and magazines. Some might say that comic strip artists don’t get the props that they deserve. They give us the simple delight of a smile, a chuckle or an all-out laugh. They’re one of those everyday things we tend to pass by, yet they’re sometimes important as their humor is sometimes the only solace in those dreary days.

Grassroot Award*
This award is for those countless photocopied mini-comics that we now fondly call “indies”. That among those countless black and white comics stood out and proved to be the one with the most Oomph! of them all. This is for the indie that made the biggest dent among the populace be it good or bad, it made enough noise for people to look and take notice. It made enough of a statement that people actually stopped and listened. It brought something new and fresh that has never been done or seen before. Be it the concept, the art, or the story, it was a breath of fresh air among the masses of photocopied, folded in half and stapled twice in the spine comics. This is meant for those who dreamt of making a mark on the comic industry, and have succeeded, quite magnificently at that.

Best Webcomic*
A lot of effort goes into the webcomics we see and enjoy on the net. And they do not get the credit they deserve. But that’s why we are here, to give props to those under-appreciated webcomics, to give to where it is due.

Komiks Character of the Year
This award is for the most memorable, the funniest and most unforgettable komiks character. It could be male, female, a robot, an animal…anything. This is for our respective favorites, villain or hero.

Best Comic Scene
Who would forget that first kiss, that most tragic death, that most exhilarating fight, or even that scene that brought you to tears or made you curl up in laughter?

Comics Aid Award
Komiks would have not been possible if creators did not have any help. This is for those who have helped take comics from concept to fruition, from the little things to the humongous tasks. For all those who helped from photocopiers to publishers, family and friends, for artists, fans and fellow believers who continue to spread awareness about the industry, this is for those who have helped make what we see before our eyes.

VOTING
• Voting period will be from August 10 – September 20, 2009. The voting procedures will be announced.

For inquiries about the awards, please direct your questions to komikon.awards@gmail.com